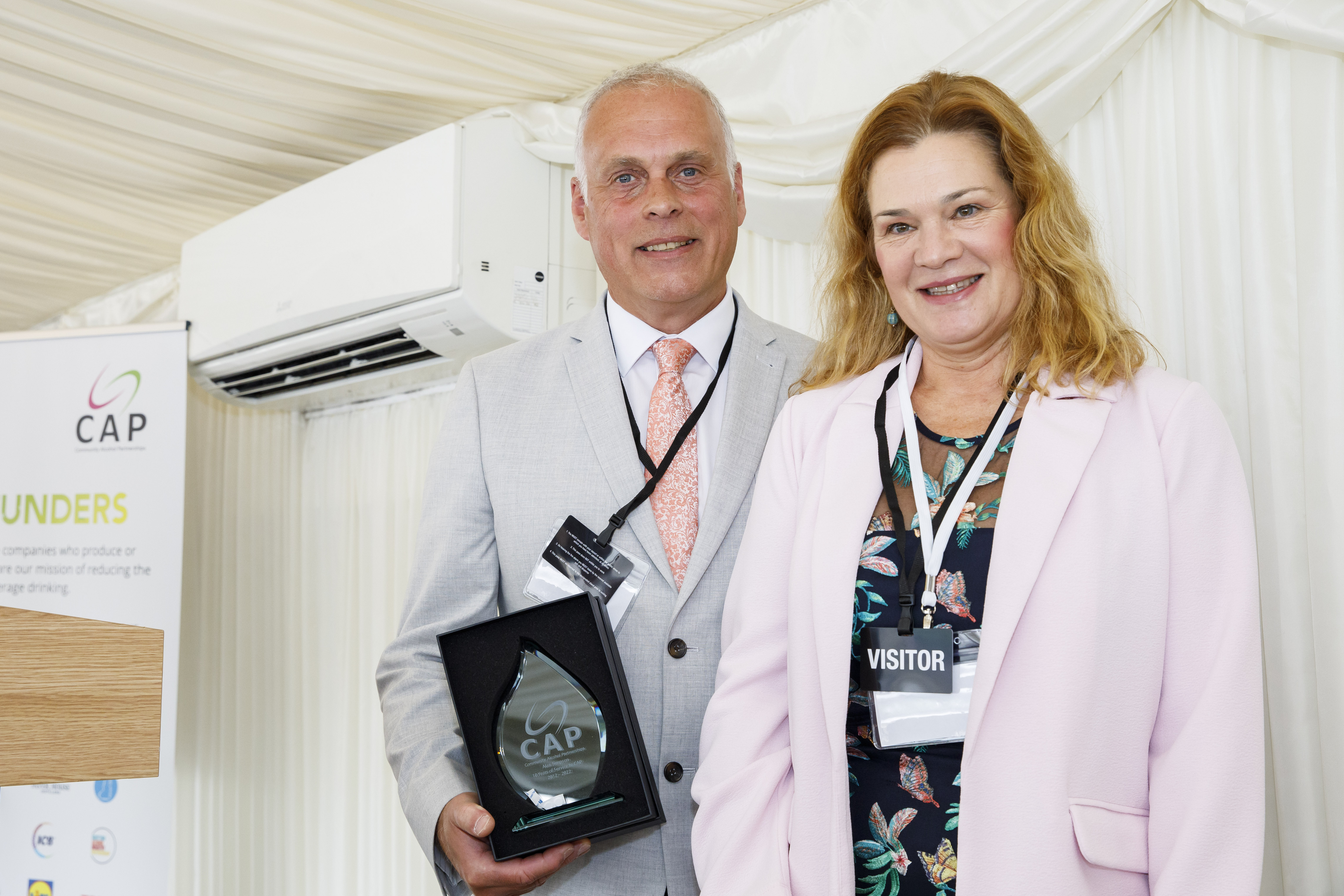 Alan Simpson, Doncaster-based Community Alcohol Partnerships (CAP) adviser for the North East of England, East Midlands and Scotland, received a surprise award at the CAP celebration event at Westminster this week in recognition of 10 years’ work devoted to tackling underage drinking and improving the health and wellbeing of young people.

It was presented by Kate Winstanley, Director of CAP, who said: “Alan Simpson joined CAP after serving 32 years as a police officer in South Yorkshire Police. As Inspector in charge of an area with very high levels of anti-social behaviour Alan saw the benefits of the CAP approach and set up a very successful CAP in Barnsley. Over the years, Alan has built up a great deal of expertise in partnership work and has launched 130 CAPs across the North East, East Midlands and Scotland.

Alan’s 100% commitment to all his CAPs, his problem-solving approach and knowledge of what works, his meticulous approach to evaluation and impact and his reliable “can do” attitude make him an invaluable asset to the CAP team. Thank you so much Alan and here’s to another 10 years.”

Since CAP was created 15 years ago, more than 250 schemes have been launched in England, Scotland and Wales. They bring together local stakeholders with a shared interest in preventing underage drinking and encouraging responsible drinking among young adults. CAP partnerships are made up of retailers, local authorities, police, schools, neighbourhood groups and health providers, all working together to protect young people from alcohol harm.

CAP’s annual report, launched at the Westminster event, shows how this innovative partnership approach has brought significant reductions to children’s drinking, anti-social behaviour and underage sales in areas where it has created local partnerships.

Kate Winstanley said: “I’m delighted that in CAP areas around the country we are seeing such sustained reductions in regular drinking and anti-social behaviour among young people.  CAPs are having a significant impact on reducing children’s alcohol consumption, improving their health and wellbeing and enhancing the communities where they live.”

A new partnership launches in Preston to tackle underage drinking

Community Alcohol Partnerships reports substantial reductions in children’s drinking – and says the remaining barrier to reducing alcohol harm among under 18s is the supply of alcohol by parents.

Parents left in the dark about alcohol and their children

A new partnership launches in Rossendale to tackle underage drinking

Canterbury CAP launches with a focus on underage sales

Send us your nominations for the annual CAP Awards

You can also read the Community Alcohol Partnership Newsletters here:

Working with CAP has helped partners to engage with the licensing trade to greatly reduce the sale of alcohol to young people.